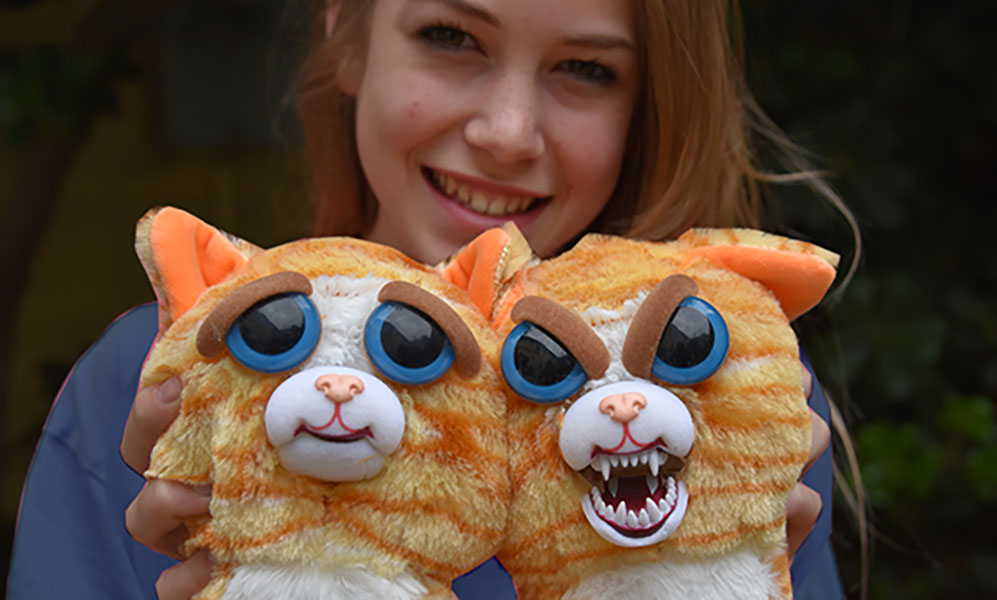 And Feisty Pets dominated the holiday best sellers on Amazon toys with 9 out of 20 of the top 20 best sellers-- including #1 Best Seller and #2 Best Seller!

Insider Design posted our Feisty Pets video and have gained over a million views so far!

These stuffed animals go from cute to terrifying (via Insider Picks).

The Daily Mail wrote a story about Fiesty Pets that is getting a lot of shares! Check it out:

Would YOU buy these toys for kids? Fluffy creatures look adorable at first but then transform into scary animals with one squeeze

And over at ViralNova this Feisty Pets story is going viral!

These Adorable Plushies Are Hiding A Sinister Secret

And now on Amazon Feisty Pets is ranked #1 Best Seller in the Plush Interactive Toys category! AND, Buzzfeed just named Feisty Pets a contender for “Best Toy of 2016”! Check out the article at:
https://www.buzzfeed.com/feistypets/surprise-contender-for-best-toy-xmas-2016-2gdfq

Feisty Pets go from cute to feisty with just a squeeze to the back of the head. Choose from 4 animals: bear, dog, cat and monkey – and more animals are currently in production. Which one do you like most? Any ideas for future Feisty Pets? How do you tell the world about your remote-controlled flying fish toys?

Go the traditional route of advertising in print, on TV and online at potentially great expense, or simply make a video?

By Ben Paynter - Want To Make A Hit Toy Like Air Swimmers? Engineer The Video Before The Product. Instead of making a toy for kids, Mark Forti made one for YouTube--and now all his products are crafted for virality.

Air Swimmers was one of the hottest toys in the U.S. last year, and yet the company behind it didn’t spend a dime on advertising. Instead, Mark Forti, founder and CEO of the William Mark Corporation, filmed a gag reel about the surprising ways that people could actually use Air Swimmers--those remote controlled inflatable sharks or Nemo-fish--and uploaded it to YouTube. In one shot, the nimble mini-floater exits an elevator in a crowded office building trailed by an operator in full scuba gear. In another, the shark looms over a cat hunting a smaller fish in a fishbowl, scaring the bejesus out of it. Forti sold millions of the $40-dollar toys as a result of his YouTube antics, but he’s more interested in his view count: It’s at nearly 9 million and counting. "I’m a millionaire in the attention economy," he says.