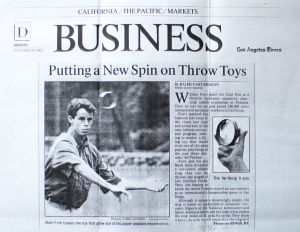 Although it appears disarmingly simple, the ring is based on sophisticated aerospace concepts. Experts at the National Aeronautics and Space Administration are not sure what makes the ring, called an X-zylo, fly so far. They think it has to do with the lift created by the ring as it moves through the air with a gyroscopic effect as it spins.

"It does go amazingly far," said NASA's Robert Stark, a technology transfer expert. "It is clear that the ring has lift and that there is gyroscopic action, because it is stable in flight. But it is surprising."

Like so many former aerospace workers in Southern California trying to market their ideas, Forti is hoping that his flying ring becomes his ticket to a new career.

In 1992, Forti was co-chairman of the L.A. County Aerospace Task Force, which recommended that the county put a major emphasis on defense conversion. Forti has successfully begun producing the ring and is selling it in about 170 toy stores throughout Southern California.

"It is successful, but it hasn't become a fad," Forti said. "We really won't break through until we get some large orders. We have a half-dozen potential deals for a major order."

Forti said he is negotiating a test-marketing deal with Macy's that he hopes will lead to nation-wide distribution. He is also hoping that Wal-Mart will test-market the toy next spring.

Ultimately, however, the flying ring may have a bigger market in the industrial or defense worlds.

Forti has enlisted the aid of an unemployed gyroscope expert and an aeronautics specialist, both laid off from General Dynamics, to write a formal proposal to request defense conversion funding from the Economic Development Corporation of Los Angeles County. He also plans to submit the device for funding from the Defense Department's conversion program.

Typically, an object must weigh at least several ounces to be thrown very far. A competition Frisbee, for example, weighs about six ounces. A baseball weighs 5.25 ounces.

But the one-ounce X-zylo, measuring 3.75 inches in diameter, overcomes that principle, shooting in a straight line with little noticeable drop in air speed until the end of the flight. A gyroscopic principle called "precession" keeps the spinning ring from dipping downward, Forti said.

NASA experts figure the concept might be applied to high-altitude research aircraft. The agency is also considering whether a bullet or artillery round could be configured like a flying ring or if it could be used to lob hand grenades long distances.

Meanwhile, Michael Boisvert, a competitive Frisbee player, said that the X-zylo is quickly attracting tremendous interest in the competitive world of flying games. He said he has thrown an X-zylo more than 600 feet and figures it is only a matter of time before he or another competitor can break the world Frisbee record of 637 feet.

When Boisvert took an X-zylo to the Frisbee championship games last summer, it immediately attracted interest.

"It stops people dead in their tracks," he said,. "They can't believe it is possible to throw something this light so far. I have played with a lot of flying toys, but X-zylo is really unique."

Whether X-zylo can achieve the success the Frisbee enjoys is less clear,. The Frisbee's great appeal is its versatility, precision and adaptability to different games. So far, X-zylo is mainly a curiosity in the world of competitive throwing.

The original idea for the flying ring came from the younger Forti, who was experimenting with different configurations of paper airplanes two years ago. When he mindlessly tossed a paper ring configured like an X-zylo, it shot across the room in level flight.

"Basically, I was trying to avoid homework," the Baylor University graduate recalled.

Mark designed the packaging and sought patents on the design. William Forti worked with a plastic manufacturing company to design a machine that could mass produce the rings with the close tolerances needed for accurate flights. The toy retails for $7 to $10.

We sold out a box at Balboa Toys (in Newport Beach) in two hours during a demonstration," Mark Forti said. "When people see it fly, they want one."