X-zylo™ is the incredible flying gyroscope that has been thrown the length of two football fields! It's flight is simply unbelievable--the ultimate game of catch!

Rated the best flying toy in a Christian Science Monitor field test, the X-zylo™ has flown onto the outdoor recreational scene as one of the most exciting games of catch. It was invented by Mark Forti, a Baylor University student, and refined within the aerospace industry.

X-zylo™ unofficially broke the world flying disc distance record when it was thrown 655 feet. NASA scientists, renowned aerospace engineers and academic institutions have met with the makers of the X-zylo™, the William Mark Corporation, and studied X-zylo's™ fascinating flight technology, yet no consensus has been reached on how X-zylo™ actually flies.

X-zylo™ has been featured on many television programs such as "Beyond 2000", "Science Times", and "Live With Regis and Kathie Lee" as well as in numerous national and international news publications including the Los Angeles Times, Success Magazine, The Christian Science Monitor, and the New York Times.

Click here for throwing and catching instructions as well as ideas for some crazy trick throws! 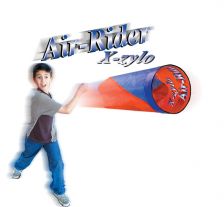 The X-zylo Air Rider™ was created for fascinating flight patterns and ease of throwing. Just whip the Air Rider™ by the tail or throw it like a football and watch its 9-inch profile colorfully surf the air!

Anyone can achieve stunning trick throws and amazing flights.

This amazing flying tube with colorful and durable ripstop nylon is a blast for ages 6 to 106!

Check out our glowing night-time variation on the bestselling X-zylo Ultra. The X-zylo Night Flight™ is thrown just like the X-zylo Ultra™ and flies almost as far, but it has one extra special feature.

Hint: When you're finished playing with the X-zylo Night Flight™, put the light sticks in the freezer to keep them glowing until the next time you want to use them

Mini X-zylos™ spin as they magically soar through the air!

Just pull back the handle, twist, and let it fly! Comes with launcher and two Mini X-zylos™! Extra Mini X-zylos™ are available for purchase.

Hint: To launch the Mini X-zylos™ the greatest distance possible, pull the handle back as far as you can, then twist it about 1/4 of a turn. Make sure the bottom of the Mini X-zylo™ is resting on the red square. Now let go!