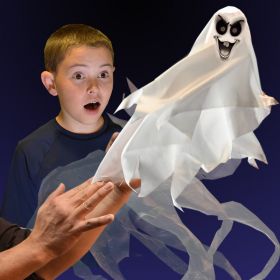 Magically Floats All Around You!

Mystify your friends with this amazing illusion!

No batteries or remote control required!  For ages 8 and up.

Teach Your Pet Ghost All Kinds of Tricks!
Show the sheet is empty...
... then the ghost rises from the jar!

As with any skill toy, the more you practice, the more amazing illusions you can perform!

Hang Glider Jack™ is a unique flying replica of a real hang glider. He folds up, launches sky high, and pops open to soar and glide to the ground! It's the only one of its kind. 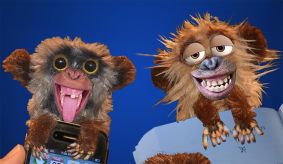 Throw Spin Rim™ like a flying disc or grab it by the tail, spin it, and create amazing tricks! 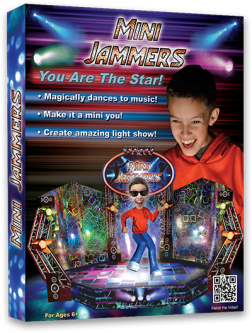 Mini Jammers are incredible little performers that dance to music on their own stage - complete with a brilliant lightshow - and they follow your every command. Tell your Mini Jammer to "Start dancing!", "Stop!", "Sit down!", or "Dance faster!" and it obeys every time!

Use the My Jammer web interface to give the dancer your own face or your friend's face, or even your dog's face! Style your Mini Jammer with the included clothed, hats, instruments and other accessories - or design your own. You are the star!

Mini Jammers seem to respond to your voice, but here is the secret: you control the Mini Jammer with your hands using invisible thread(included). It's as easy as tapping your hand to the beat! The secret is yours unless you choose to reveal it... 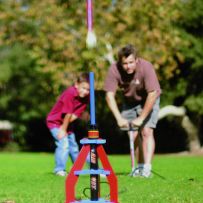 The award-winning Air Burst Rocket™ system incorporates an entirely new propulsion technology, utilizing air to create a shock wave and Venturi effect that launches its rockets higher and faster than any non-combustion rockets on earth!

When membrane boosters within the launcher burst, Air Burst™ generates astounding power that sends rockets to amazing heights. With a few pumps from a stand-up bike pump, rockets can be easily and repeatedly launched. No combustible or expensive rocket engines needed!

With five different power levels to choose from, you can launch Air Burst™ rockets to varying altitudes reaching up to 1,000 feet and even beyond visual range! The highest power level requires adult strength. Be prepared for a truly amazing model rocketry experience!

Also available: Air Burst Mighty Missiles™ Rocket System. It's just a bit smaller and less powerful so that younger children can launch it themselves.

Packages of extra rockets and boosters are available for both Air Burst™ and Mighty Missiles™.