All About Flitter Fairies

Here’s a list of all the fun things to do at flitterfairies.com!

Humans don't really exist. Every fairy over the age of five knows that!

No sensible fairy really believes the human tales told around the village fires. But one fateful day, thirteen-year-old Alexa meets a real -live human girl in the forest. No one believes her except the ancient dryad Ispirianza, who everyone thinks is crazy anyway.

Now Alexa finds herself at the center of a struggle to save her land and her race from the deadly Scarring and the mysterious humans hold the only key. To open the hidden corridor to the human world, Alexa must complete a series of nearly impossible tasks such as stealing magical candledark from the terrifying Oth fairies.

Even with help from her older sisters Eva and Daria, a nervous sylph sprite, and a fearless fire fairy, Alexa must act quickly if she is to save the fairies' realm Slightly Above Time.

Eva is the oldest of the three sisters and a Lake Fairy. The most mature sister, Eva teaches her sisters and those around her as a Fairy of Compassion. Her calming and lovely blue-and-silver dress reminds people to remain cool like water instead of indulging anger. Her long silver hair and deep blue eyes are beautiful and captivating. With Eva at your side, you can learn to be a compassionate friend, too. 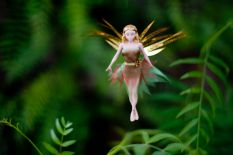 Daria is the feisty middle child and a Forest Fairy. When Daria flits through the forest, all the creatures feel safe knowing that she looks out for them in her role as a Fairy of Protection. Daria wears gold and green so that she can more easily hide herself within the forest. Her gorgeous gold hair and green eyes make her stunning. Let her protect you and your home, too!

Alexa is the youngest of three sisters and a Meadow Fairy. When Alexa tends the meadow, she inspires the flowers to grow and so Alexa was named a Fairy of Inspiration. Alexa is super cute and wears a shiny pink and green dress with a hot pink sash. She has short bronze hair and hazel eyes. Let her inspire you to grow and learn and be more creative!

Mara is a feisty Fire Fairy who's very good at taking care of herself. She's brave, intelligent, and resourceful. Fire Fairies are tasked with keeping the element of fire in balance.

Aerioth is a mysterious Cave Fairy who lives in the dark caves of Evernaught. She carries a glowing green Lumastone to light her way. The Lumastone lights up whenever Aerioth flaps her wings.